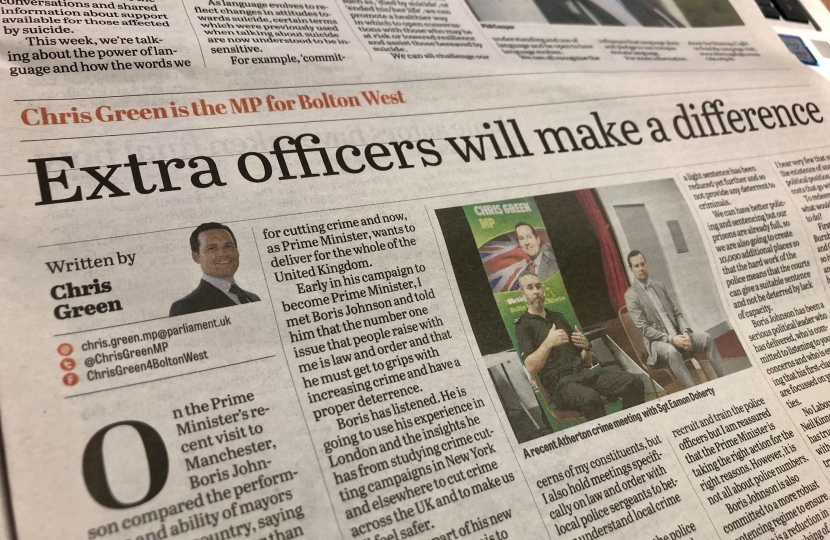 As well as being a leader, Boris knows that he has to listen to peoples’ concerns and build a great team to deliver improvements.  He has a great reputation for cutting crime and now, as Prime Minister, wants to deliver for the whole of the United Kingdom.

Early in his campaign to become Prime Minister, I met Boris Johnson and told him that the number one issue that people raise with me is law and order and that he must get to grips with increasing crime and have a proper deterrence.

Boris has listened. He is going to use his experience in London and the insights he has from studying crime cutting campaigns in New York and elsewhere to cut crime across the UK and to make us all feel safer.

The key part of his new anti-crime strategy is to boost police numbers. There are also increasing pressures on the police with them now having to deal with more problems to do with mental health, on-line fraud and wider cybercrime and increased police officers will help tackle this.

I regularly hold public meetings to hear the concerns of my constituents, but I also hold meetings specifically on law and order with local police sergeants to better understand local crime concerns.  It is clear that the police are over worked, we need more officers and that the commitment to recruiting 20,000 over the next three years is going to make a transformative difference.

It is going to take time to recruit and train the police officers but I am reassured that the Prime Minister is taking the right action for the right reasons. However, it is not all about police numbers.

Boris Johnson is also committed to a more robust sentencing regime to ensure that there is a reduction in the automatic halving of many sentences handed out by the courts.  Too often we hear that a light sentence has been reduced yet further and so not provide any deterrent to criminals.

We can have better policing and sentencing but our prisons are already full, so we are also going to create 10,000 additional places so that the hard work of the police means that the courts can give a suitable sentence and not be deterred by lack of capacity.

Boris Johnson has been a serious political leader who has delivered, who is committed to listening to your concerns and who is ensuring that his first-class team are focussed on your priorities.

No Labour leader, from Neil Kinnock to Ed Miliband, has trusted Jeremy Corbyn with anything so how can you trust him with the country?

Within Greater Manchester, there have always been huge doubts as to whether the mayoral system of devolution is right for us.  Obviously, there will be views on either side though I hear very few that support the existence of another political position and all the costs that go with it.

To redeem this situation, what would the mayor need to do?  Firstly, the mayor, Andy Burnham, is also the Police and Crime Commissioner so has responsibility for law and order on our streets but he has chosen to step back from resolving the ongoing iOPS scandal.  You may not yet have heard about it but the iOPS computer system it is taking police off the streets, damaging moral and is creating a more dangerous policing environment.

The much maligned Greater Manchester Spatial Framework is being delayed yet again and details will only be announced following the mayoral elections next year, so how can we hold the mayor to account?  How much building on the green belt is being plan but will be kept hidden from voters?