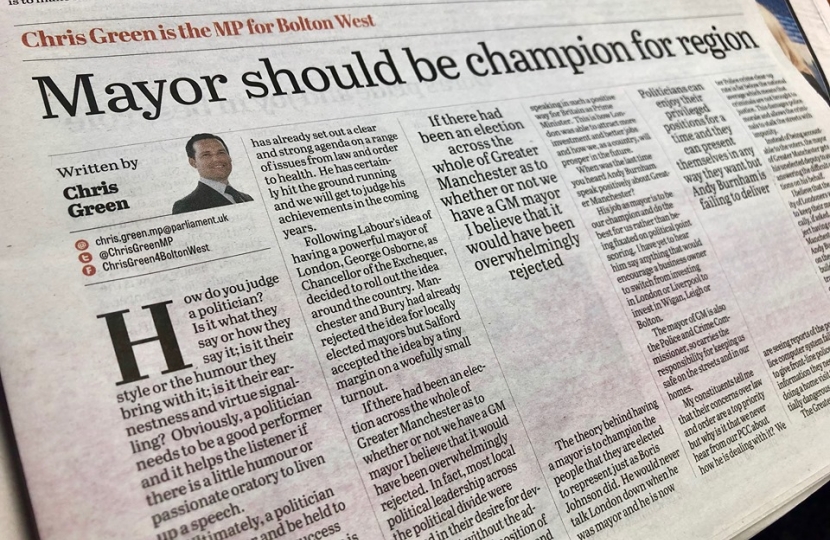 How do you judge a politician?  Is it what they say or how they say it; is it their style or the humour they bring with it; is it their earnestness and virtue signalling?  Obviously, a politician needs to be a good performer and it helps the listener if there is a little humour or passionate oratory to liven up a speech.

Ultimately, a politician must deliver and be held to account for their success or failure.  Boris Johnson is widely considered to have been a successful mayor of London and delivered on law and order and on transport.  He has only been Prime Minister for a few weeks but he has already set out a clear and strong agenda on a range of issues from law and order to health.  He has certainly hit the ground running and we will get to judge his achievements in the coming years.

Following Labour’s idea of having a powerful mayor of London, George Osborne, as Chancellor of the Exchequer, decided to roll out the idea around the country.  Manchester and Bury had already rejected the idea for locally elected mayors but Salford accepted the idea by a tiny margin on a woefully small turnout.

If there had been an election across the whole of Greater Manchester as to whether or not we have a GM mayor I believe that it would have been overwhelmingly rejected.  In fact, most local political leadership across the political divide were united in their desire for devolution but without the additional political position of mayor with all the costs and bureaucracy that go with it.

The theory behind having a mayor is to champion the people that they are elected to represent just as Boris Johnson did.  He would never talk London down when he was mayor and he is now speaking in such a positive way for Britain as Prime Minister.  This is how London was able to attract more investment and better jobs and how we, as a country, will prosper in the future.

When was the last time you heard Andy Burnham speak positively about Greater Manchester?

His job as mayor is to be our champion and do the best for us rather than being fixated on political point scoring.  I have yet to hear him say anything that would encourage a business owner to switch from investing in London or Liverpool to invest in Wigan, Leigh or Bolton.

The mayor of GM is also the Police and Crime Commissioner, so carries the responsibility for keeping us safe on the streets and in our homes.

My constituents tell me that their concerns over law and order are a top priority but why is it that we never hear from our PCC about how he is dealing with it?  We are seeing reports of the police computer system failing to give front-line police the information they need when doing a home visit to a potentially dangerous person.

The Greater Manchester Police crime clear-up rate is far below the national average which means that criminals are not brought to justice.  This damages police morale and allows the criminals to stalk the streets with impunity.

Instead of being accountable to the voters, the mayor of Greater Manchester gets his unelected deputy to avoid answering the difficult questions on his behalf.

I believe that the majority of Londoners would want to keep their mayor but locally, if asked, we would reject having one for Greater Manchester.  We have seen Andy Burnham fail to deliver on the GMSF plan for house building, fail on improving transport and fail on law and order.

The United Kingdom is taking steps to a return to normality.  Many more people are returning to work and plans are in place for schools to get back to teaching children in class.