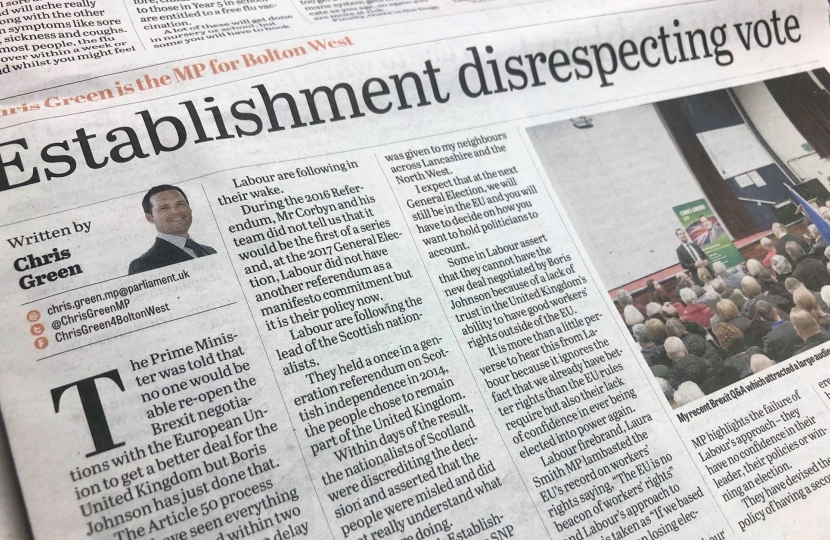 The Prime Minister was told that no one would be able re-open the Brexit negotiations with the European Union to get a better deal for the United Kingdom but Boris Johnson has just done that.

The Article 50 process should have seen everything done and dusted within two years but we have seen delay after delay orchestrated by vested interests in the world of politics and beyond.

The Liberal Democrats were the first political Party to demand a decisive In/Out referendum but, on hearing the actual views of the British people, they turned their backs on our democratic decision.  Labour are following in their wake.

During the 2016 Referendum, Mr Corbyn and his team did not tell us that it would be the first of a series and, at the 2017 General Election, Labour did not have another referendum as a manifesto commitment but it is their policy now.

Labour are following the lead of the Scottish nationalists.  They held a once in a Generation referendum on Scottish independence in 2014, the people chose to remain part of the United Kingdom.  Within days of the result, the nationalists of Scotland were discrediting the decision and asserted that the people were misled and did not really understand what they were doing.

The British Establishment is following the SNP play book in disrespecting your vote.

My constituents gave me a decisive instruction to take us out the EU and it was the same instruction that was given to my neighbours across Lancashire and the North West.  I expect that at the next General Election, we will still be in the EU and you will have to decide on how you want to hold politicians to account.

Some in Labour assert that they cannot have the new deal negotiated by Boris Johnson because of a lack of trust in the United Kingdom’s ability to have good workers’ rights outside of the EU.  It is more than a little perverse to hear this from Labour because it ignores the fact that we already have better rights than the EU rules require but also their lack of confidence in ever being elected into power again.

Labour firebrand, Laura Smith MP lambasted the EU’s record on workers’ rights saying, “The EU is no beacon of workers’ rights” and Labour’s approach to Brexit is taken as “If we based our policies on losing elections”.

This clear-sighted Labour MP highlights the failure of Labours approach – they have no confidence in their leader, their policies or winning an election.  They have devised their policy of having a second referendum not because they believe it but because the Labour inner circle is based in London and they are all Europhiles.

Boris Johnson has a strong agenda for policing, education and health but we must have a General Election to give him a majority but Labours Islington elite are blocking it because they do not respect your view and fear your judgment.