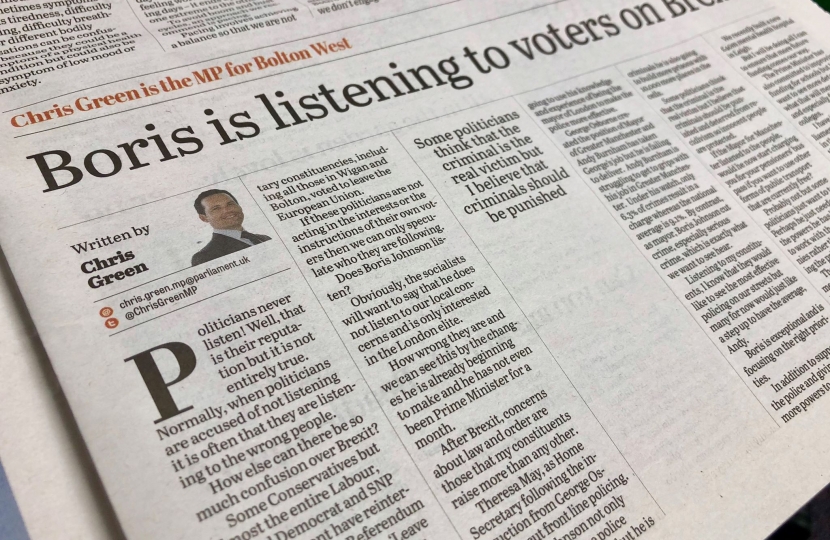 Politicians never listen!  Well, that is their reputation, but it is not entirely true.  Normally, when politicians are accused of not listening it is often that they are listening to the wrong people.  How else can there be so much confusion over Brexit.

Some Conservatives but almost the entire Labour, Liberal Democrat and SNP establishment have re-interpreted the 2016 Referendum result from ‘Leave’ to ‘Leave but only under conditions that, in effect, mean Remain’.

How have they come to that conclusion?  I doubt that it is by listening to their voters since the vast majority of Parliamentary constituencies, including all those in Wigan and Bolton, voted to leave the European Union.

If these politicians are not acting in the interests or the instructions of their own voters then we can only speculate who they are following.

Does Boris Johnson listen?  Obviously, the socialists will want to say that he does not listen to our local concerns and is only interested in the London elite.  How wrong they are and we can see this by the changes he is already beginning to make and he has not even been Prime Minister for a month.

After Brexit, concerns about law and order are those that my constituents raise more than any other.  Theresa May, as Home Secretary following the instruction from George Osborne, cut front line policing.  Boris Johnson not only wants to increase police numbers by 20,000 but he is going to use his knowledge and experience of being the mayor of London to make the police more effective.

George Osborne created the position of Mayor of Greater Manchester and Andy Burnham has taken George’s job but he is failing to deliver.  Andy Burnham is struggling to get to grips with his job in Greater Manchester.  Under his watch, only 6.3% of crimes result in a charge whereas the national average is 9.1%.  By contrast, as mayor, Boris Johnson cut crime, especially serious crime, which is exactly what we want to see here.

Listening to my constituents, I know that they would like to see the most effective policing on our streets but many for now would just like a step up to have the average, Andy.

Boris is exceptional and is focusing on the right priorities.  In addition to supporting the police and giving them more powers to catch more criminals he is also going to build more prisons with 10,000 more places in the cells.  Some politicians think that the criminal is the real victim but I believe that criminals should be punished and deterred from recidivism so innocent people are protected.

If the Mayor for Manchester listened to the people, would he now start charging you for your pensioners’ bus pass if you want to use other forms of public transport that are currently free?  Probably not but some politicians just want to tax.  Perhaps he just needs to use the powers he has been given to work with the bus companies rather than always seeing the private sector as bad.

The Conservative government had already committed to spend £20.5Bn a year extra for the NHS but the new Prime Minister is adding another £1.8Bn which shows our commitment to the health of the nation.  We recently built a new £40m mental health hospital in Leigh but I will be doing all I can to ensure that more future funding comes our way.

The Prime Minister has also committed to improving funding for schools but I still want to see more details on what that will mean locally and especially for sixth form colleges.  I have just been made Parliamentary Private Secretary in the Department for Education so you can be sure that I will be using my position to champion the local needs.

In the few weeks since Boris Johnson was elevated from being a backbench MP to Prime Minister, he has, with a furious pace, set out a strong agenda on Brexit, law & order, health and education.  He has demonstrated that he is listening and will deliver whilst Jeremy Corbyn’s team in Manchester and London want to tax us back to the 70s.