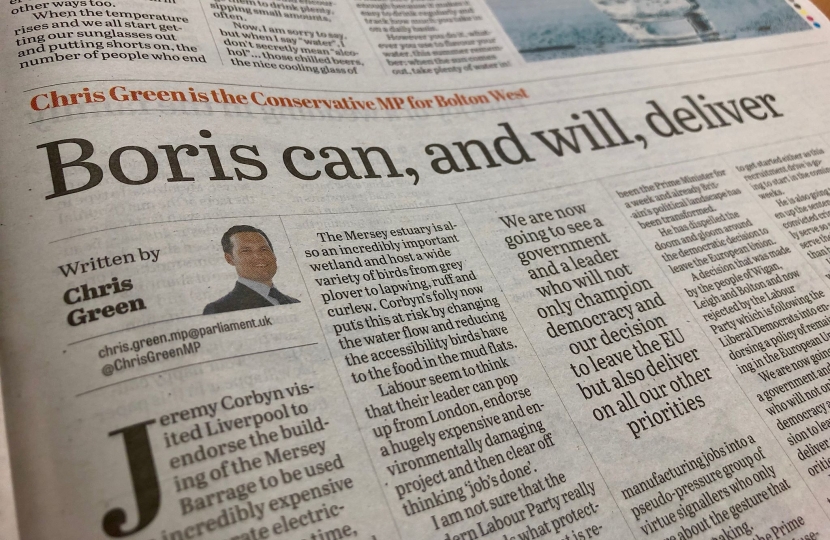 Jeremy Corbyn visited Liverpool to endorse the building of the Mersey Barrage to be used as an incredibly expensive way to generate electricity and, at the same time, save the planet from global warming.  This was his vision to regenerate the North and it sounded like an expensive folly, using largely untested technology and will probably cause a massacre of wildlife as their precious habitat is destroyed.

In recent years, the River Mersey has seen a significant improvement in the quality of its water and the return of sea trout, eels and lamprey. The Mersey estuary is also an incredibly important wetland and host a wide variety of birds from grey plover to lapwing, ruff and curlew.  Corbyn’s folly now puts this at risk by changing the water flow and reducing the accessibility birds have to the food in the mud flats.

Labour seem to think that their leader can pop up from London, endorse a hugely expensive and environmentally damaging project and then clear off thinking ‘job’s done’.  I am not sure that the modern Labour Party really understands what protecting the environment is really about.  Fundamentally, they believe that if they export manufacturing jobs overseas along with the factories and carbon emissions then they will save the planet.

Labour have so shifted from their traditional values where they would have championed traditional manufacturing jobs into a pseudo-pressure group of virtue signallers who only care about the gesture that they are making.

By contrast, the Prime Minister visited the Museum of Science and Industry in Manchester to announce his vision for re-invigorating the economy, improving education and delivering on law & order.

Boris Johnson has only been the Prime Minister for a week and already Britain’s political landscape has been transformed.  He has dispelled the doom and gloom around the democratic decision to leave the European Union.  A decision that was made by the people of Wigan, Leigh and Bolton and now rejected by the Labour Party who is following the Liberal Democrats into endorsing a policy of remaining in the EU.

We are now going to see a government and a leader who will not only champion democracy and our decision to leave the EU but also deliver on all our other priorities.

I have been telling ministers that we need to support our police with more money and greater numbers, Boris Johnson has listened and has reaffirmed his commitment to doing just that by recruiting another 20,000 police officers.  He is not waiting around to get started either as this recruitment drive is going to start in the coming weeks.

He is also going to toughen up the sentences that convicted criminals actually serve so serious offenders serve their sentence rather than being let out early.  Unlike Labour who think that criminals are the real victims, we need a system that deters criminal behaviour in the first place.

I was shocked when Boris Johnson said that in 2007, 1,299 offenders across the UK, with 50 previous convictions, were again convicted but were spared jail. I was not surprised to hear that the figure had risen to 3,196 by 2018.  Boris Johnson, as the mayor of London, substantially cut crime especially the most serious offenses and this is what he intends to do for the country.

We want better standards of education in our schools and we need to fund these improvements, so I was delighted to hear that this is a key focus that the new Prime Minister will have.  He is going to level up school funding so that schools and teachers have the funding that they need.

Boris Johnson knows that some of the things that work so well in London will also work well across the rest of England.  This is why he is determined to invest more money in rail infrastructure and also ensure that we are going to have full fibre internet access rolled out across the country.

With better transport, communications, education and jobs Boris Johnson has set out a powerful vision for the country that, as Prime Minister, he can and will deliver.  The Contrast with Labour’s chosen leader who wants to block up the Mersey couldn’t be more stark.