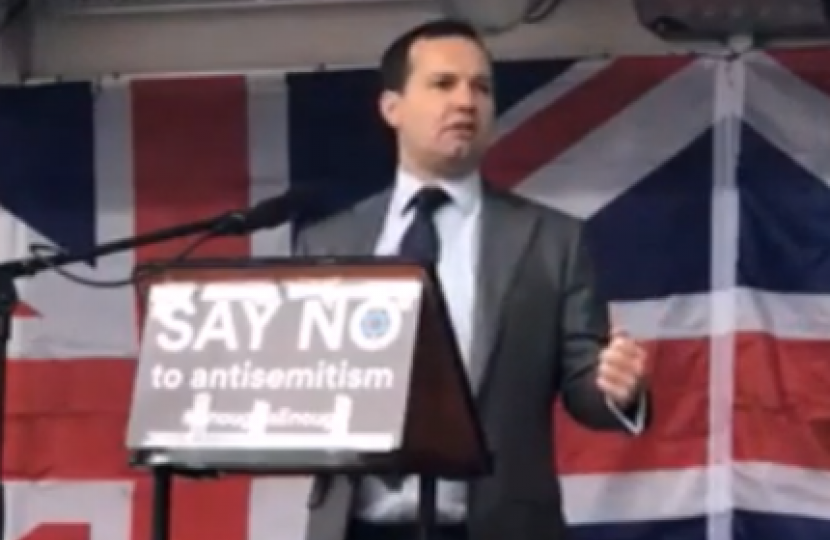 “There we have it folks, proof if any was needed that the Labour Party IS institutionally racist and will be until Corbyn and his cronies go #EnoughIsEnough #Panorama”. This is what the official Labour press team communicated to the country, via twitter, until they deleted the message and claimed that the account was hacked.

Labour is undergoing a full statutory investigation by the Equality and Human Rights Commission because of concerns over anti-Semitism. The only other political party to have been investigated like this before was the BNP led by Nick Griffin.

What has been bubbling under the surface of the Labour Party for many years is now out in the open but how have Labour MPs, councillors and members reacted? Some have left the Labour Party and want nothing to do with it or its anti-Semitism. They have tried to fight it from within but have seen the impossibility of winning because every lever of power in Labour is controlled by the extremists who see that there is a messaging war to be won rather than an evil to be rooted out.

What of those Blairites, right-wing Labour members and assorted others? In the early days of Mr Corbyn’s leadership, there was a mass resignation of the shadow cabinet and ministerial positions in the hope of dislodging the man the membership overwhelmingly backed to be Labour leader. It failed but could it have succeeded?

Perhaps it could have succeeded but only if there was solidarity within the Labour Parliamentary Party. When people put their own ambitions before the good of their political party and the country then it is difficult, if not impossible, for those taking a brave and principled stance to win. If senior politicians who enjoyed their promotions under Tony Blair stand in solidarity with Mr Corbyn – Labour is a broad and inclusive church after all – then the new leader will maintain his position.

Unfortunately, Andy Burnham, who held the powerful and influential position of shadow Home Secretary remained loyal to Mr Corbyn when so many others thought that Corbyn should go. Perhaps there was no connection between that loyalty to Mr Corbyn and Mr Burnham getting the plumb job of being selected as the mayor for Manchester. I have not yet heard Mr Burnham speak out to condemn Mr Corbyn but then Labour are currently going through the process of selecting their mayoral candidate.

Dame Margaret Hodge MP has accused the leader of the Labour Party as being anti-Semitic and I was proud to join her at a rally attended by over two thousand members of the Greater Manchester Jewish community to express our concerns about the rise of anti-Semitism in the UK. Many people there believed that Mr Corbyn was a block in dealing with the problem and demanded “Corbyn out”. I did not hear any solidarity, in that regard, from any of Greater Manchester’s senior Labour leaders.

Some politicians are more comfortable with posturing on historic grievances rather than dealing with current problems, even when it gives a space for their friends to be targeted. Holding a powerful position and dodging responsibility gives the space for the targeting of more vulnerable people and those who will not stand idly by. This is just the same as Mr Corbyn has done as Labour leader.

Luciana Berger MP needed security to protect her at a Labour Party conference because of the serious threat of violence from within the secure zone from Labour Party members. She and a large group of other moderate Labour MPs have now left the irredeemable Labour Party.

Numerous members of the House of Lords have left the Labour Party – many, such as Lord Alan Sugar, had been lifelong Labour members. Many dignified and widely respected Labour MPs have chosen to step down at the next election rather than campaign to win Labour more votes and set up Mr Corbyn as Prime Minister of the United Kingdom.

No doubt, many Labour politicians will cling to their positions and hope not to be ousted in the socialist purge but, when it comes to racism, when will enough be enough? Does it matter whether their twitter account has been hacked when the Labour Party definitely has been?