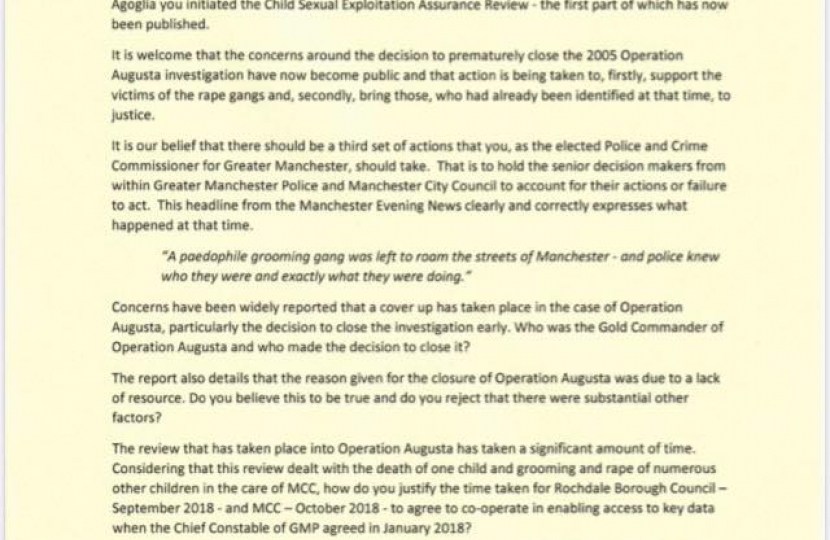 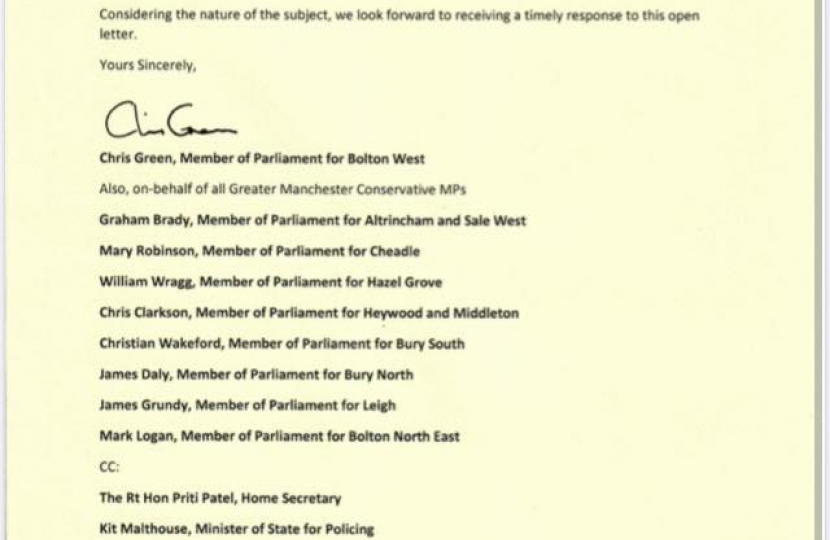 It is welcome that the concerns around the decision to prematurely close the 2005 Operation Augusta investigation have now become public and that action is being taken to, firstly, support the victims of the rape gangs and, secondly, bring those, who had already been identified at that time, to justice.

It is our belief that there should be a third set of actions that you, as the elected Police and Crime Commissioner for Greater Manchester, should take.  That is to hold the senior decision makers from within Greater Manchester Police and Manchester City Council to account for their actions or failure to act.  This headline from the Manchester Evening News clearly and correctly expresses what happened at that time.

“A paedophile grooming gang was left to roam the streets of Manchester - and police knew who they were and exactly what they were doing.”

The report also details that the reason given for the closure of Operation Augusta was due to a lack of resource. Do you believe this to be true and do you reject that there were substantial other factors?

The review that has taken place into Operation Augusta has taken a significant amount of time.  Considering that this review dealt with the death of one child and grooming and rape of numerous other children in the care of MCC, how do you justify the time taken for Rochdale Borough Council – September 2018 - and MCC – October 2018 - to agree to co-operate in enabling access to key data when the Chief Constable of GMP agreed in January 2018?

Significant concerns have also been raised regarding the failures of GMP officers and social workers at Manchester City Council to take the correct action to protect the vulnerable children involved in Operation Augusta. As you will have seen from the Betrayed Girls documentary, Detective Constable Margaret Oliver said that the sexual abuse was “like a production line” and that any investigation “was being buried”.

Do you agree with her and what action, as PCC and Mayor of Greater Manchester, will you be taking to pursue criminal, misconduct or negligence charges against individuals from GMP and Manchester City Council who oversaw these failings?

This review has also brought to light the incredible bravery, integrity and self-sacrifice it takes to challenge the system and to be a whistle blower. Under your leadership, are you certain that officers and civilian staff in GMP have full confidence that they would have the necessary support to come forward?

Considering the nature of the subject, we look forward to receiving a timely response to this open letter.

Graham Brady, Member of Parliament for Altrincham and Sale West

Chris Clarkson, Member of Parliament for Heywood and Middleton