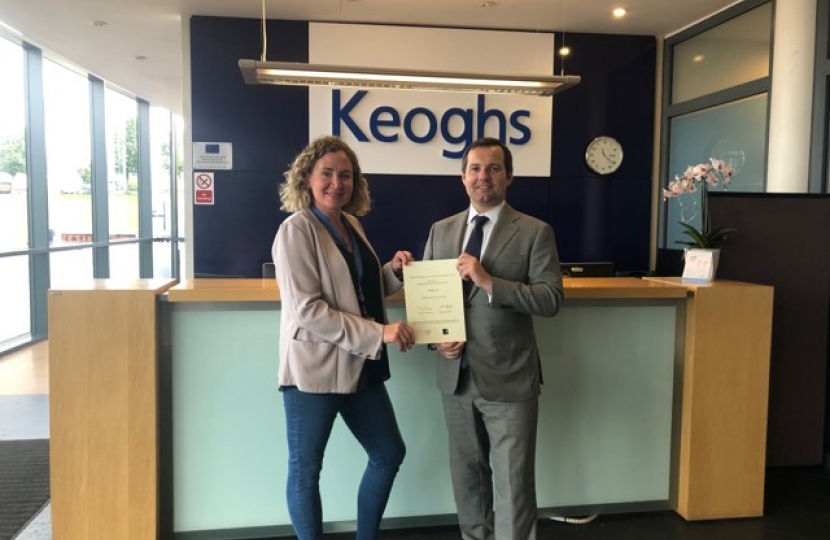 This prestigious award, organised by the All-Party Corporate Responsibility Group, celebrates Keoghs commitment to recruiting people from the local area, providing opportunities for good-quality training and expanding their business in the town.

Keoghs have also created initiatives which encourages people with no background or qualifications in law to apply for entry-level roles within the firm, which has helped the firm recruit over 100 people who had previously been long-term unemployed.

The Bolton West MP nominated the local firm having been impressed with the firm’s work during a visit to their Horwich-based headquarters last year and visited the firm again today to present their Responsible Business Champion with the award.

Speaking about his choice of nomination, Mr Green said: “Keoghs have contributed a great deal to our local community, not just through their endeavour to recruit local people but also through their links with local charities and their recycling policies.

“This is why I was so pleased to hear that Keoghs were successful in becoming Bolton West’s Responsible Business Champion.”

Rachel Mitchell-Denson, Keoghs’ Responsible Business Manager, said: “Keoghs remain committed to recruiting local people in a sustainable, scalable and replicable way that positively impacts our surrounding communities and the people who live in them especially those who are disadvantaged through no fault of their own.

“We are delighted to have been nominated by Chris Green MP for the Responsible Business Champion Scheme 2019."

Investing in our high streets and backing business

Thanks to our balanced approach to the economy we can invest in our high streets and town centres. That’s why I’m working with the new Conservative council and local residents to regenerate Horwich and Westhoughton town centres and I’ll push Wigan Council to improve Atherton. Bringing empty shops back into use and championing small businesses with my Best Local Shop competition.