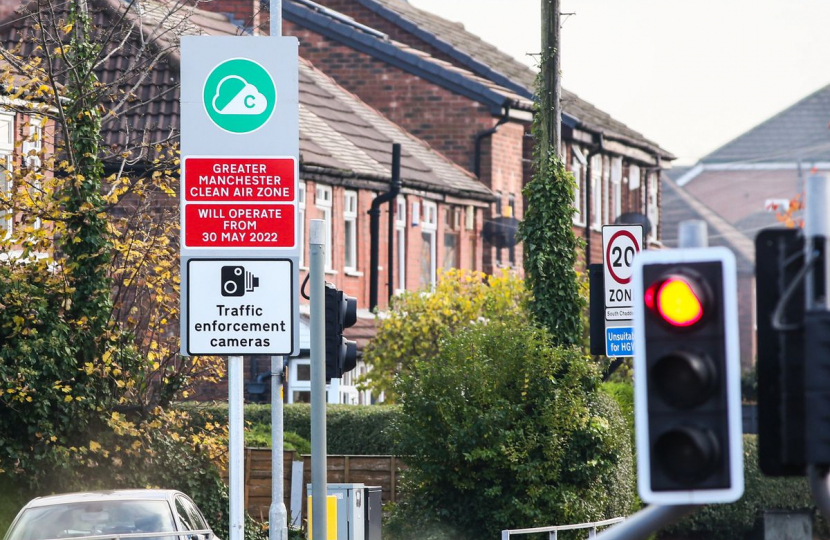 I campaigned against the 2008 Congestion Charge plans which were invented as a money grabbing scheme and the 2022 version is no better.  People across Leigh, my constituency and the whole of the Greater Manchester administrative area overwhelmingly voted against the original scheme so why have the local leaders supported this version?

They are going on the airwaves and wailing that this is a plan dreamt up in Whitehall to punish us when the cost-of-living crisis is biting deeper and deeper.  I was telling my readers, Ministers and anyone who would listen that this tax scheme would be damaging to business and would pile on more costs on to the shoulders of the poorest.

Business cannot simply shoulder the cost of £60 per day per heavy goods vehicle.  The costs were always going to be dumped on you, the consumer.  I knew it, you knew it but our local leaders had no idea.  Sounds like they are as out of touch now as they were in 2008.

The accusation that this is a Westminster scheme is foolish as well.  People can go back and look to see that I have long opposed the scheme but, other than asking for a little more cash, none of the Labour leaders are on the record as opposing it until the public backlash started.

I remember a meeting with a Minister at the beginning of 2019 when I was pleading with her to intervene and oppose this scheme.  She told me that I had to be wrong about it because, every time she discussed it with the Greater Manchester leaders, they always told her that they loved it and did not want any change.

Obviously, the Covid-19 pandemic and global lockdowns and restrictions have had a massive knock-on effect on supply chains which means that companies that could have afforded to spend a fortune on replacing their vehicles cannot even buy them because the manufacturers cannot make them fast enough.

From the beginning of the lockdown approach to dealing with Covid-19, I was deeply concerned by the knock-on effects of shutting down our economy.  Some people sneered that protecting our economy was going to be at the cost of sacrificing many more lives.  Research now shows that lockdowns had very little benefit in protecting lives and it is now clear that the economic costs are going to be with us for years to come.

As the GM CAZ has risen up the political agenda, not least by James Grundy’s powerful intervention at Prime Minister’s Questions, we can now hope and perhaps even expect that Ministers will now over-rule the original plan and come up with one that protects health whilst valuing business.