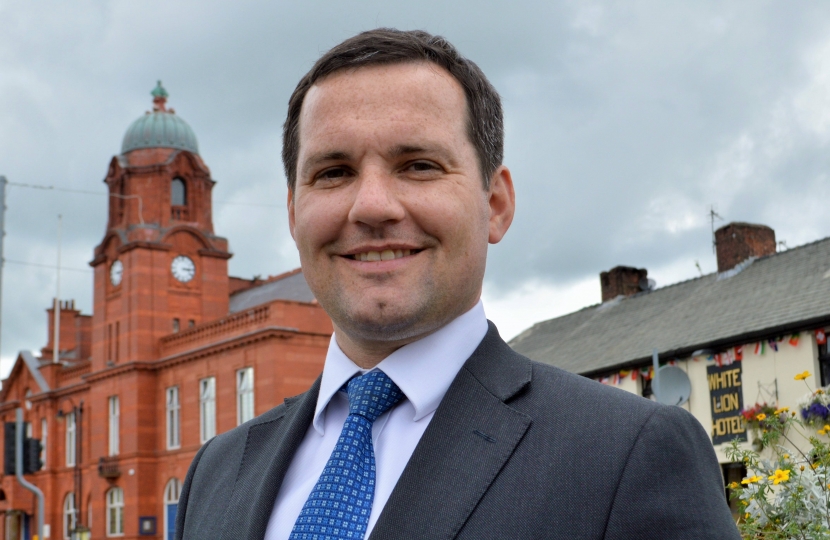 I am writing in my capacity as Member of Parliament for Bolton West and Atherton in response to the consultation on the latest version of the Greater Manchester Spatial Framework (GMSF). As previously outlined, I support the principle of GMSF as it provides the opportunity for our local authorities to create a framework for our housing and employment needs whilst also setting out the investment in our local infrastructure.

However, when I speak to my constituents during public meetings and out on the doorstep, as well as through email and social media, they continue to tell me of their legitimate worry that the present version of the GMSF does not deliver the local improvements that they want to see. It is of great importance that I put forward the concerns my constituents have raised with me about this GMSF draft, concerns that I also share.

Within my constituency the towns of Westhoughton, Horwich and Atherton hold their own unique community identities. Over recent years, however, our towns have seen a significant amount of development, with the building of new houses, business parks and shopping centres. Although some of these improvements have been welcome, there is a concern that much of this new development   has been built on the outskirts of these towns and they have begun to merge as a result.

This trend appears to have continued in the latest version of GMSF, with Allocation 51 (Land West of Gibfield) proposing 700 new houses and 45,500sqm of industrial space. This allocation will lead to the merging of the towns of Atherton and Westhoughton, despite the fact that they have distinct identities and are in two different boroughs.

Constituents tell me that the distinct identity of their town is an important reason for people to stay in their community after growing up there, as well as for people choosing to move there.  Instead, our towns are now being turned into a commuter belt. This is especially apparent since many of the recently built houses have been 3 or 4-bedroom executive houses that only encourage people to move in to our towns rather than provide housing for the next generation of local residents. Instead, our local authorities should be delivering a diverse range of housing to meet the differing needs of residents in all our towns.

The increase in housebuilding in recent years has led to an increase in the local population which has already placed significant pressures upon Bolton West and Atherton’s existing infrastructure. The level of infrastructure needed to support the present population is not sufficient, let alone what is needed to support the proposed housing and industrial developments in the GMSF. As a result, many of my constituents feel that their towns will continue to deteriorate, leading to a feeling that they have been ‘left behind’.

Constituents face congested roads daily and journeys taking far longer than expected.  The rise in local population has also placed a greater demand on our schools to provide more places, a demand that they are already struggling to meet. Waiting times for local health services are lengthening and local leisure facilities are also struggling to operate at their current capacity.

My constituents are worried that the infrastructure requirements outlined in the current version of GMSF only serve to fix the existing infrastructure problems caused by the historic, undirected development our towns have seen. For example, the proposals outlined in GM Allocation 6 and in GM Allocation 51 for the long-needed Westhoughton Bypass, first proposed in the 1970s, would only support existing levels of traffic.

Although I welcome the proposals to build the Westhoughton Bypass, something that I have long campaigned for, I still have worries over the lack of detail about the road infrastructure needed to support the traffic generated by the GMSF proposals. Details of the improvements to schools, health and leisure facilities are also lacking given the expected population rise across our towns in the future.

As the Combined Authority and local authorities will be aware, many of my constituents also have concerns about the significant destruction they have seen of our local green spaces over recent years. So much so, that groups of constituents have taken matters in to their own hands, campaigning against developments at Bowlands Hey, Wingates Industrial Estate, Hulton Park and the houses planned at the South of Atherton. Responses to a recent green-belt survey in the area also displayed a clear message that local people do not want any more green-belt development.

Although I welcome the fact that Bolton has not been allocated any green spaces for housing development, green spaces have still been allocated for industrial space across Bolton and also for housebuilding and industrial space in Atherton. It is also concerning that the Hulton Park Estate is still included in GMSF, allocated as a “Green Infrastructure Opportunity Area”, despite local people making it very clear that this is not the kind of development that they want to see in their community.

There are a number of brown-field sites available across my constituency and across Bolton and Wigan which provide the opportunity for both housing and industrial development. It concerns me that there is still a significant amount of our green space proposed or left vulnerable for development in the latest version of GMSF and I urge the Greater Manchester Combined Authority and our local councils to rethink what continues to appear to be a ‘green-space-first’ policy.

As a result of this feedback from my constituents, I urge you in my capacity as Member of Parliament for Bolton West and Atherton to listen to their views.

My constituents want to see detailed plans of the infrastructure improvements proposed to resolve ongoing infrastructure strains, never mind the added pressures from future developments outlined in GMSF. They also want their communities and local township identities to be protected from the increasing urban sprawl that has turned their unique towns into suburbs of Manchester.  Finally, Bolton West and Atherton constituents want to see their local green spaces preserved for the enjoyment of current and future generations, not lost forever to more executive houses and industrial complexes as outlined in this version of GMSF.

I urge you also to seriously consider their views when reflecting upon, if not redrafting this current version of the GMSF before implementing it."