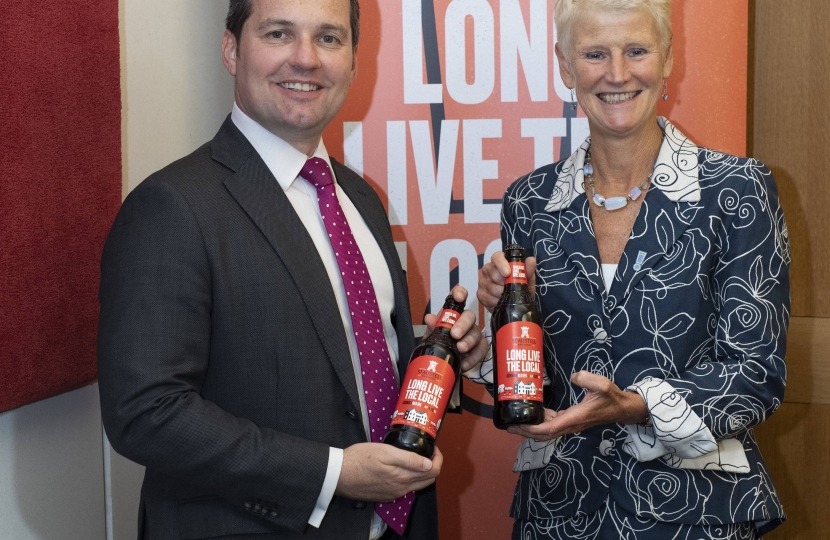 Chris Green MP has today pledged his support for the Long Live the Local Campaign to help pubs in Bolton West keep their doors open. Chris Green joins the more than 150,000 people who have signed the petition so far, including 160 in Bolton West and Atherton.

The local MP is also calling on the Government to cut beer tax at the Budget. With £1 in every £3 pounds spent in UK pubs going to the taxman, British drinkers now pay 40% of all beer tax across the EU, but drink only 12% of the beer.

Commenting on the campaign, Chris Green MP said: “Pubs are at the heart of communities across Bolton West and Atherton and also provide over 1,000 local jobs but with three British pubs closing their doors for good every day the Government should consider a cut to beer tax.

“I’m supporting the Long Live the Local campaign and calling on the Chancellor to cut beer tax at this year’s Budget to support pubs in our local communities.”

Brigid Simmonds, Chief Executive of the British Beer & Pub Association, said: “Beer duty has increased by 60% over the last 17 years and now the UK has one of the highest rates of tax in Europe. When over two thirds of all alcoholic drinks purchased in the pub are beers, a cut in beer tax would go a long way to protecting pubs across Bolton West.

“We are very grateful to Chris Green for his support for the Long Live the Local campaign, and hope that the Government listens to MPs across Parliament and the thousands of people across the country who are calling for a cut in beer tax to protect our pubs.

Investing in our high streets and backing business

Thanks to our balanced approach to the economy we can invest in our high streets and town centres. That’s why I’m working with the new Conservative council and local residents to regenerate Horwich and Westhoughton town centres and I’ll push Wigan Council to improve Atherton. Bringing empty shops back into use and championing small businesses with my Best Local Shop competition.