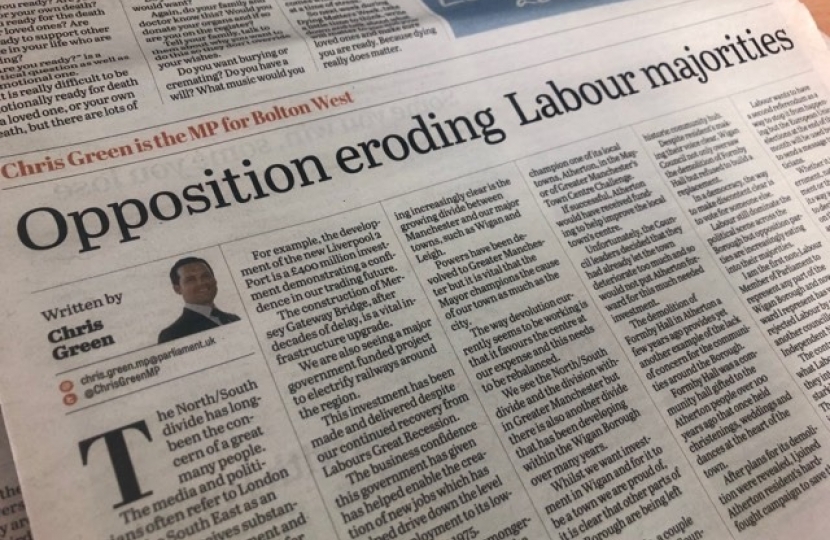 The North/South divide has long-been the concern of a great many people. The media and politicians often refer to London and the South East as an area that receives substantially more investment and the North has suffered for decades with a lack of investment. However, in recent years we have seen the cities of Manchester and Liverpool have drawn in a significant amount of investment and they are now booming as a result.

The investment is not just in shopping developments and new blocks of flats. For example, the development of the new Liverpool 2 Port is a £400 million investment demonstrating a confidence in our trading future. The construction of Mersey Gateway Bridge, after decades of delay, is a vital infrastructure upgrade. We are also seeing a major government funded project to electrify railways around the region. This investment has been made and delivered despite our continued recovery from Labours Great Recession.

The business confidence this government has given has helped enable the creation of new jobs which has helped drive down the level of unemployment to its lowest point since 1975. Despite the scaremongering of some politicians, the vast majority of new jobs are normal salaried positions and the number of zero-hour contracts are actually going down.

However, what is becoming increasingly clear is the growing divide between Manchester and our major towns, such as Wigan and Leigh. Powers have been devolved to Greater Manchester but it is vital that the Mayor champions the cause of our town as much as the city. The way devolution currently seems to be working is that it favours the centre at our expense and this needs to be rebalanced.

We see the North/South divide and the division within Greater Manchester but there is also another divide that has been developing within the Wigan Borough over many years. Whilst we want investment in Wigan and for it to be a town we are proud of, it is clear that other parts of the Borough are being left behind.

For example, a couple of years ago, Wigan Council had the opportunity to champion one of its local towns, Atherton, in the Mayor of Greater Manchester’s Town Centre Challenge. If successful, Atherton would have received funding to help improve the local town’s centre. Unfortunately, the Council leaders decided that they had already let the town deteriorate too much and so would not put Atherton forward for this much needed investment.

The demolition of Formby Hall in Atherton a few years ago provides yet another example of the lack of concern for the communities around the Borough. Formby Hall was a community hall gifted to the Atherton people over 100 years ago that once held christenings, weddings and dances at the heart of the town.  After plans for its demolition were revealed, I joined Atherton resident’s hard-fought campaign to save the historic community hub. Despite resident’s making their voice clear, Wigan Council not only oversaw the demolition of Formby Hall but refused to build a replacement.

In a democracy, the way to make discontent clear is to vote for someone else. Labour still dominate the political scene across the Borough but opposition parties are increasingly eating into their majorities. I am the first non-Labour Member of Parliament to represent any part of the Wigan Borough and now the ward I represent has wholly rejected Labour by electing another councillor form the Independent Network.

The contrast between what Labour say and what they intend to do is most starkly seen with Brexit. The overwhelming majority of people in the area vote to leave the EU but Labour are determined to delay and delay. Labour wants to have a second referendum as a way to stop it from happening but the European Union elections at the end of this month will be used by many, to send a message to all politicians.

Whether it is in local government, national government or the EU, change is on its way and politicians have to decide whether they are on the side of the people or against them.