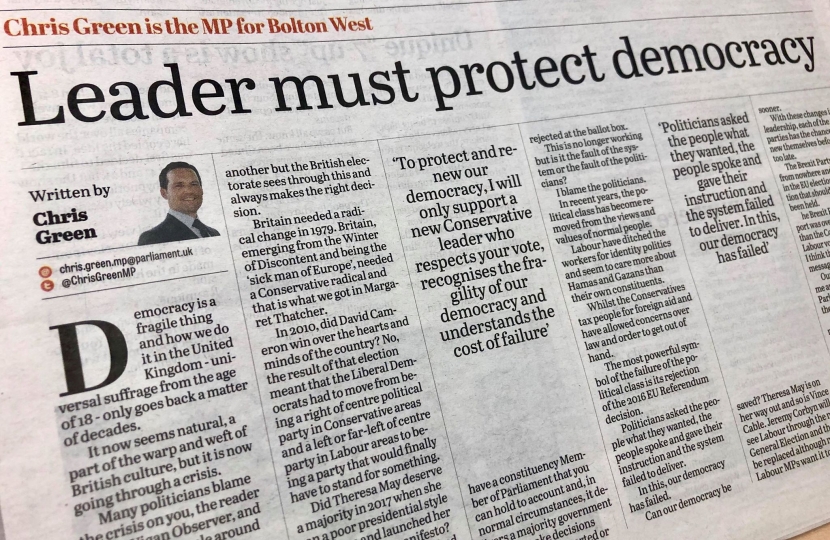 Democracy is a fragile thing and how we do it in the United Kingdom -  universal suffrage from the age of 18 - only goes back a matter of decades. It now seems natural, a part of the warp and weft of British culture, but it is now going through a crisis.

Many politicians blame the crisis on you, the reader of the Wigan Observer, and many other people around the country.

There is a normal political knockabout between Labour and the Conservatives which does, upon occasion, go too far but does normally rest within acceptable bounds. We can caricature one another but the British electorate sees through this and always makes the right decision

Britain needed a radical change in 1979. Britain, emerging from the Winter of Discontent and being the ‘sick man of Europe’, needed a Conservative radical and that is what we got in Margaret Thatcher.

In 2010, did David Cameron win over the hearts and minds of the country? No, the result of that election meant that the Liberal Democrats had to move from being a right of centre political party in Conservative areas and a left or far-left of centre party in Labour areas to being a party that would finally have to stand for something.

Did Theresa May deserve a majority in 2017 when she ran a poor presidential style campaign and launched her poorly received manifesto?  No, so another coalition had to be formed.

Our system of voting, first past the post, means that you have a constituency Member of Parliament that you can hold to account and, in normal circumstances, it delivers a majority government that can make decisions which  can be supported or rejected at the ballot box.  This is no longer working but is it the fault of the system or the fault of the politicians?

I blame the politicians.

In recent years, the political class has become removed from the views and values of normal people.  Labour have ditched the workers for identity politics and seem to care more about Hamas and Gazans than their own constituents. Whilst the Conservatives tax people for foreign aid and have allowed concerns over law and order to get out of hand.

The most powerful symbol of the failure of the political class is its rejection of the 2016 EU Referendum decision. Politicians asked the people what they wanted, the people spoke and gave their instruction and the system failed to deliver. In this, our democracy has failed.

Can our democracy be saved? Theresa May is on her way out and so is Vince Cable. Jeremy Corbyn will see Labour through the next General Election and then be replaced although many Labour MPs want it to be sooner. With these changes in leadership, each of the main parties has the chance to renew themselves before it is too late.

The Brexit Party came from nowhere and came first in the EU election, an election that should never have been held.  The Brexit Party’s support was over a million more than the Conservatives and Labour votes combined and I think that this sends a clear message.

Our democracy is telling me and all other Members of Parliament to take us out of the EU. The Conservative Party must seize this chance of renewal with a new leader and to respect the EU referendum result.

To protect and renew our democracy, I will only support a new Conservative leader who respects your vote, recognises the fragility of our democracy and understands the cost of failure.