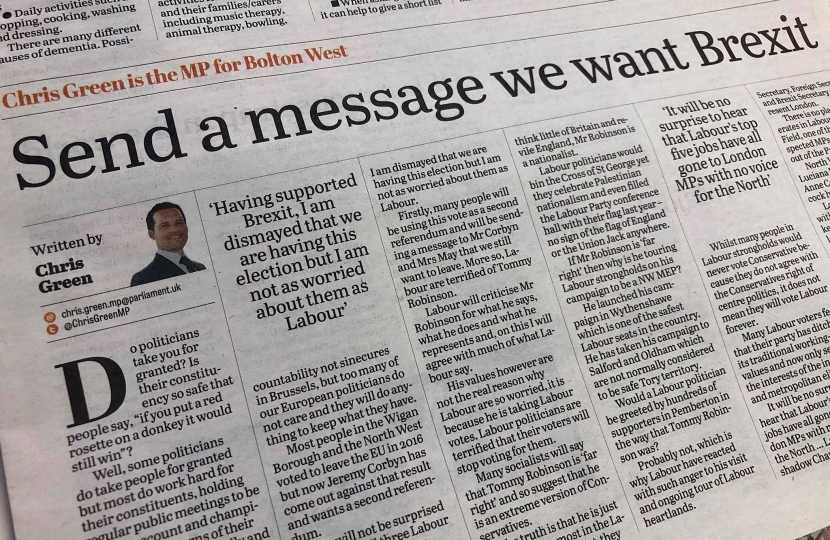 This raises the question of how do we hold our MEPs to account? Where do they hold their surgeries or public meetings? Can you even name one of your MEPs? Democracy is about accountability not sinecures in Brussels, but too many of our European politicians do not care and they will do anything to keep what they have.

Most people in the Wigan Borough and the North West voted to leave the EU in 2016 but now Jeremy Corbyn has come out against that result and wants a second referendum. You will not be surprised to hear that all three Labour MEPs in the NW want a second referendum so they can keep their cushy jobs in Brussels.

Having supported Brexit, I am dismayed that we are having this election but I am not as worried about them as Labour. Firstly, many people will be using this vote as a second referendum and will be sending a message to Mr Corbyn and Mrs May that we still want to leave. More so, Labour are terrified of Tommy Robinson.

Labour will criticise Mr Robinson for what he says, what he does and what he represents and, on this I will agree with much of what Labour say. His values however are not the real reason why Labour are so worried, it is because he is taking Labour votes. Labour politicians are terrified that their voters will stop voting for them.

Many socialists will say that Tommy Robinson is ‘far right’ and so suggest that he is an extreme version of Conservatives. The truth is that he is just as left wing as most in the Labour Party but, whilst  they think little of Britain and revile England, Mr Robinson is a nationalist. Labour politicians would bin the Cross of St George yet they celebrate Palestinian nationalism and even filled the Labour Party conference hall with their flag last year – no sign of the flag of England or the Union Jack anywhere.

If Mr Robinson is ‘far right’ then why is he touring Labour strongholds on his campaign to be a NW MEP? He launched his campaign in Wythenshawe which is one of the safest Labour seats in the country. He has taken his campaign to Salford and Oldham which are not normally considered to be safe Tory territory.

Would a Labour politician be greeted by hundreds of supporters in Pemberton in the way that Tommy Robinson was? Probably not, which is why Labour have reacted with such anger to his visit and ongoing tour of Labour heartlands. Whilst many people in Labour strongholds would never vote Conservative because they do not agree with the Conservatives right of centre politics, it does not mean they will vote Labour forever.

Many Labour voters feel that their party has ditched its traditional working-class values and now only serves the interests of the inner-city and metropolitan elite. It will be no surprise to hear that Labour’s top five jobs have all gone to London MPs with no voice for the North Labour’s leader, shadow Chancellor, Home Secretary, Foreign Secretary and Brexit Secretary all represent London.

There is no place for moderates in Labour with Frank Field, one of the most respected MPs, being hounded out of the Party. North West MPs such as Luciana Berger, Ivan Lewis, Anne Coffey and John Woodcock have also left Labour.

It’s not just MPs that are leaving the party, Labour’s activists are also leaving the party. North West Labour activist Sheila Murphy, who used to be one of Labour’s top officials for the North, left the party last week, claiming that the membership had become like, “being in an abusive relationship”. She even called the behaviour of new members as, “nasty, vicious and controlling”.

Labour’s ongoing crisis with anti-Semitism, another key reason why MPs are leaving, has also led to the Equality and Human Rights Commission to investigate them. This puts Labour in the same category as the British National Party as one of the two political parties to have been investigated by the EHRC.

Labour, therefore, has no right to feel morally superior to Tommy Robinson.

As for the EU elections, take the chance to use it as a second referendum to send a clear message that we want Brexit.