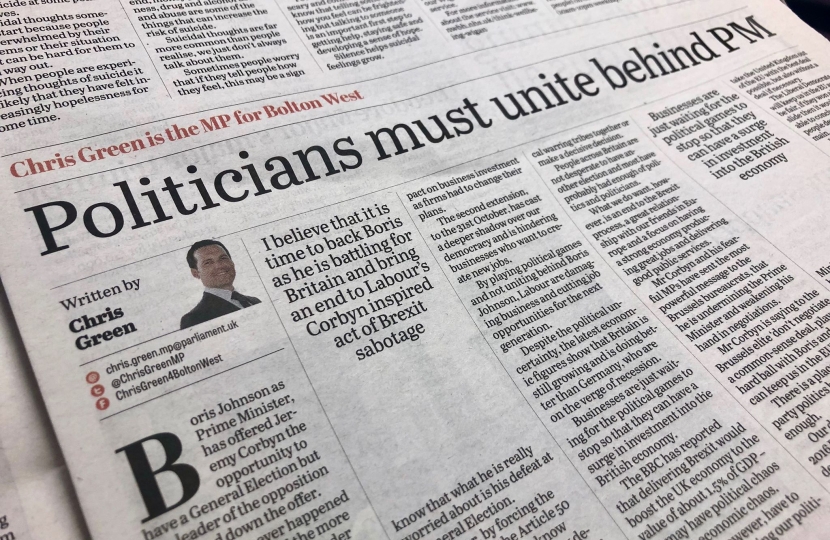 It is not because he is against the Conservative government investing in 20,000 new police officers, 10,000 prison places and billions more for schools and hospitals.  Mr Corbyn claims that it is because of Brexit when we know that what he is really worried about is his defeat at a General Election.

Labour, by forcing the extension of the Article 50 process yet again, know that they are damaging democracy and damaging our economy.  We had an extension from of the Article 50 process from the 29th March to the 12th April which had an impact on business investment as firms had to change their plans.  The second extension, to the 31st October, has cast a deeper shadow over our democracy and is hindering businesses who want to create new jobs.

By playing political games and not uniting behind Boris Johnson, Labour are damaging business and cutting job opportunities for the next generation.  Despite the political uncertainty, the latest economic figures show that Britain is still growing and is doing better than Germany, who are on the verge of recession.

Businesses are just waiting for the political games to stop so that they can have a surge in investment into the British economy.  The BBC has reported that delivering Brexit would boost the UK economy to the value of about 1.5% of GDP – we may have political chaos but not economic chaos.  We do however, have to find a way to bring our political warring tribes together or make a decisive decision.

People across Britain are not desperate to have another election and most have probably had enough of politics and politicians.  What we do want, however, is an end to the Brexit process, a great relationship with our friends in Europe and a focus on having a strong economy producing great jobs and delivering good public services.

Mr Corbyn and his fearful MPs have sent the most powerful message to the Brussels bureaucrats, that he is undermining the Prime Minister and weakening his hand in negotiations.  Mr Corbyn is saying to the Brussels elite ‘don’t negotiate a common-sense deal, play hard ball with Boris and you can keep us in the EU’.

There is a place for Party politics but enough is enough.  Our democracy and the 2016 Referendum decision demands that politicians unite behind the Prime Minister to negotiate the best deal running up to our departure on the 31st October.

Due to Labour’s tribal politics, the Prime Minister has offered Labour the chance of having an election on the 15th October so that the air can be cleared and the British people can back the agenda of their choice.

The Conservatives will take the United Kingdom out of the EU with the best deal possible, but also without a deal if necessary. The Liberal Democrats will keep us in the EU and, to be fair, if they won a landslide then it would be reasonable to conclude that British people demand that we remain.

Labour’s position however is slightly more complicated to say the least.  They want to negotiate a new deal – the best they can get – and then campaign to reject that same deal in another referendum in a year or so’s time.  If nothing else, this plan guarantees that politicians and journalists will be banging on about Brexit for another year whilst local employers put off their recruitment plans and the creation of new jobs for my constituents and the wider area.

I believe that it is time to back Boris as he is battling for Britain and bring an end to Labour’s Corbyn inspired act of Brexit sabotage.