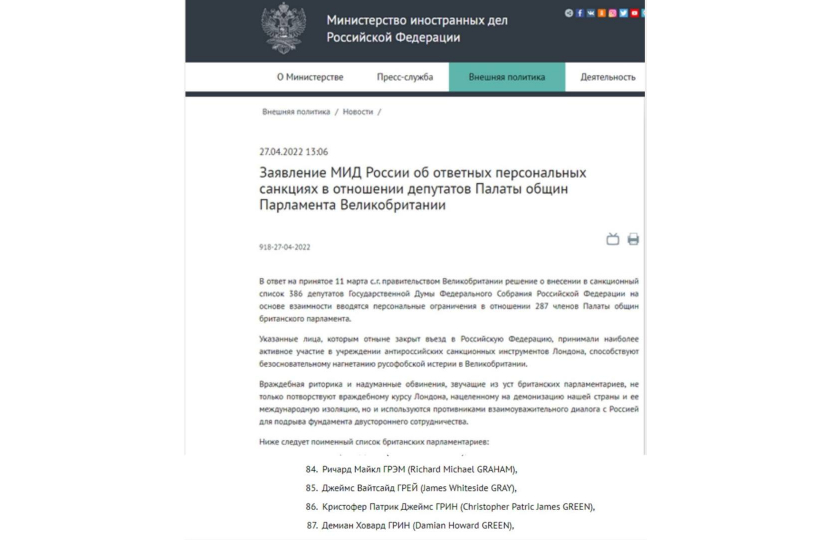 Just when I thought that the extraordinary times, we are living through could not get any weirder, they do.

Vladimir Putin, the kleptocratic President of the Russian Federation, has just had many Members of the British Parliament sanctioned, including myself.  They have not formally written to me to set out my supposed crimes against the Russian State, but it is a sign of an increasingly desperate condition of their leaders.

They targeted a handful of former MPs as well, but it is not going to have an impact on our resolve to challenge and defeat their invasion of Ukraine.  Indeed, it can only go to strengthen our determination to support the Ukrainian people in ejecting the Russian armed forces and prevent this step in recreating the old Union of Soviet Socialist Republics.

I suspect that these sanctions will not influence the travel plans of British MPs and I doubt many of us were planning our summer holidays there.

Travel locally is a far more pressing concern for my constituents as is the cost of living.  It was a relief to see the campaign, led by James Grundy MP and I, has resulted in a halting of the Greater Manchester Clean Air Zone scheme.

We know that it will add huge costs to local businesses and tip many over the edge as we struggle to recover from the Covid-19 crisis.  Unfortunately, we know that the scheme has already cost a fortune with £1,309,316 just to put up a multitude of signs around the area.  This error has then been made so much worse because the local decision makers got the scheme so wrong that they had to spend £186,000 more of taxpayers’ money on covering up all those signs.

We know that the next stage is to come up with another unwelcome scheme which will require another fortune of taxpayers’ money to redo the signs… again.

James and I campaigned against the GMCAZ, but ministers told us that they had to back it because the model decided for GM had been decided by the local political leaders who had the decisive role in choosing this model.  Leeds, Birmingham and Liverpool are all taking different approaches, so we know that the idea did not come from central Government.

Apparently, Wigan and Rochdale did not have to be in the GMCAZ scheme, but the local leaders thought that it would be a good use of your taxes to incur the expense when it was only really designed to help Manchester.

As a Member of Parliament, I enjoy all elections, though I do find General Elections to be nerve wracking experiences.  I can relax far more during local elections though they are still busy times.

I would like to wish all the campaigners and candidates the best and do remember to exercise your democratic right and vote on 5th May.

This article was originally published in the Leigh Journal on May 5th: https://www.leighjournal.co.uk/news/20118194.travel-pressing-concern-re…