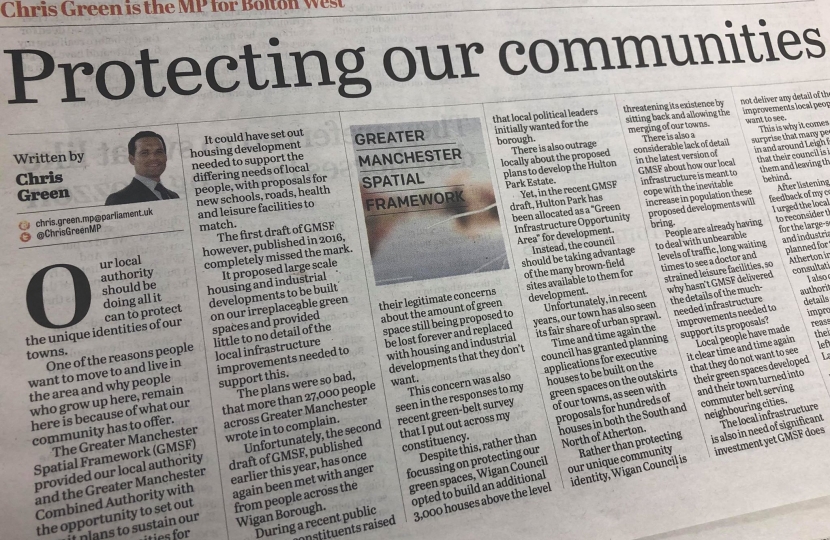 Our local authority should be doing all it can to protect the unique identities of our towns. One of the reasons people want to move to and live in the area and why people who grow up here, remain here is because of what our community has to offer.

The Greater Manchester Spatial Framework (GMSF) provided our local authority and the Greater Manchester Combined Authority with the opportunity to set out how it plans to sustain our unique communities for their current and future generations. It could have set out housing development needed to support the differing needs of local people, with proposals for new schools, roads, health and leisure facilities to match.

The first draft of GMSF however, published in 2016, completely missed the mark. It proposed large scale housing and industrial developments to be built on our irreplaceable green spaces and provided little to no detail of the local infrastructure improvements needed to support this. The plans were so bad, that over 27,000 people across Greater Manchester wrote in to complain.

Unfortunately, the second draft of GMSF, published earlier this year, has once again been met with anger from people across the Wigan Borough. During a recent public meeting, constituents raised their legitimate concerns about the amount of green space still being proposed to be lost forever and replaced with housing and industrial developments that they don’t want. This concern was also seen in the responses to my recent green-belt survey that I put out across my constituency.

Despite this, rather than focussing on protecting our green spaces, Wigan Council opted to build an additional 3,000 houses above the level that local political leaders initially wanted for the borough. There is also outrage locally about the proposed plans to develop the Hulton Park Estate. Yet, in the recent GMSF draft, Hulton Park has been allocated as a “Green Infrastructure Opportunity Area” for development. Instead, the council should be taking advantage of the many brown-field sites available to them for development.

Unfortunately, in recent years, our town has also seen its fair share of urban sprawl. Time and time again the council has granted planning applications for executive houses to be built on the green spaces on the outskirts of our towns, as seen with proposals for hundreds of houses in both the South and North of Atherton. Rather than protecting our unique community identity, Wigan Council is threatening its existence by sitting back and allowing the merging of our towns.

There is also a considerable lack of detail in the latest version of GMSF about how our local infrastructure is meant to cope with the inevitable increase in population these proposed developments will bring. People are already having to deal with unbearable levels of traffic, long waiting times to see a doctor and strained leisure facilities, so why hasn’t GMSF delivered the details of the much-needed infrastructure improvements needed to support its proposals?

Local people have made it clear time and time again that they do not want to see their green spaces developed and their town turned into commuter belt serving neighbouring cities. The local infrastructure is also in need of significant investment yet GMSF does not deliver any detail of the improvements local people want to see. This is why it comes as no surprise that many people in and around Leigh feel that their council is ignoring them and leaving their area behind.

After listening to the feedback of my constituents, I urged the local authorities to reconsider their proposals for the large-scale housing and industrial development planned for the north of Atherton in my GMSF consultation response. I also called for our local authority to provide more details of the infrastructure improvements needed to reassure local people that their community isn’t being left behind by Wigan’s Labour leadership.

Our local authority should be doing more to protect the local community and I will continue to campaign for the improvements that my constituents want to see.