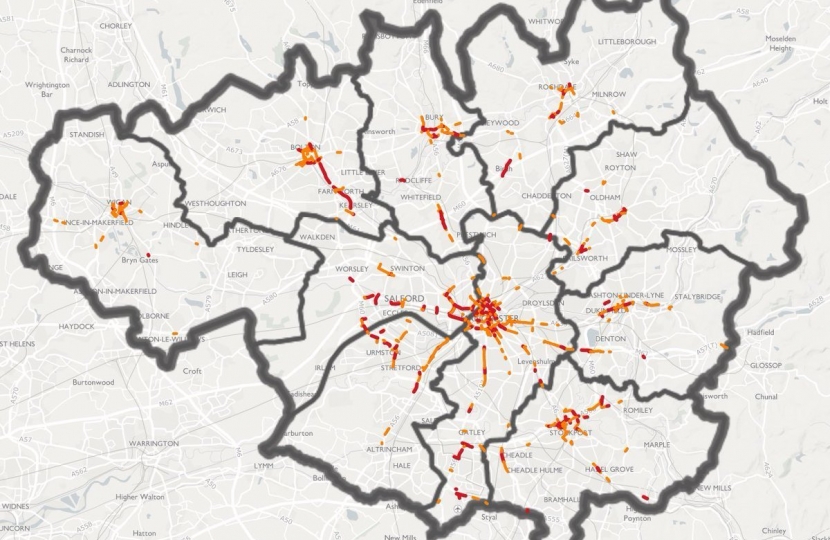 Greater Manchester’s updated version of the 2008 Congestion Charge is about to get political.

The original scheme, to ring the city of Manchester with a tax, has been revived but in a slightly different form.  Previously, anyone from the Wigan or Bolton Boroughs travelling into Manchester would have been hit with one or even two charges every day just because they were going to work, visit friends or go shopping.  The new version will start as a tax on business vehicles but it will soon be changed to be a tax on family cars as well.

The original scheme was rejected by every borough, across the whole of Greater Manchester, in a referendum.  The opposition to it was overwhelming even though the Labour Party was the driving force was the Labour Party in both local and national Government.

I always thought that the Civil Service was always rather supportive of the scheme and it has now been reintroduced, in a slightly amended form, by this Government.  There are many ways of ensuring that we have cleaner air and we should have targeted the pollution hotspots, which are concentrated in Manchester, rather than this scheme that disproportionately targets my constituents.

The Clean Air Zone has been agreed between the ten borough leaders, the Mayor of Greater Manchester and the Government.  It was worked upon and agreed by these bodies with the barest consent of workers across the area and without a referendum.  The 2008 referendum was decisive so the ‘powers that be’ subtly reworked the scheme and decided not to ask your view this time.

Initially, the scheme will apply to commercial vehicles but there is nothing to stop it being applied to family cars in a couple of years.  Members of Parliament do not get a vote on this scheme and will not be able to stop the Greater Manchester leaders from expanding it to include more vehicles.

The scheme is going to cost hundreds of millions of pounds and will be redundant in a few years because new vehicles have far cleaner engines and people are increasingly buying electric vehicles.

There are numerous problems but, when talking to local businesses, I was shocked to hear that they cannot even buy the new cleaner vehicles.  Semiconductor manufacturers are not able to produce sufficient microchips to control modern engines so the vehicle manufacturers have cancelled orders for local firms.  This means that local businesses cannot replace their vehicles and so they will be fined every single day that they operate them.

The last thing business need when recovering from the devastating impact of the Covid-19 lockdowns is to have yet another tax imposed on them.

I have been challenging Ministers on the impact of this scheme and to get it changed and perhaps delayed but they always tell me that the local political leaders are great enthusiasts for it.  In fact, this scheme would not and could not be imposed without the Mayor of Greater Manchester’s support.

Other than demanding more money, the Mayor has always publicly been in support of it and certainly has not been demanding a more sensible scheme that targets the area’s most in need.

Before the scheme was agreed across Greater Manchester, had you heard the Mayor condemn it as an imposition from Westminster?

The Mayor, Andy Burnham, has now tweeted that “It has been imposed on us by the Government” and that “they have dictated this”.  This is news to me and I think that it will be news to the Government.  If it were really not a collaborative decision then why has Andy Burnham been so quiet in his opposition up until now?

He has had years to get the right plan but, almost immediately as it has been agreed and the cameras installed, he complains and grandstands that it is someone else’s fault.

I want the scheme to be delayed, cancelled or radically changed, as anyone who hears me speak on the subjects knows, but I want to work with people to achieve those changes.

This article was originally published in the Wigan Observer: https://www.wigantoday.net/news/politics/chris-green-mp-my-views-on-the…