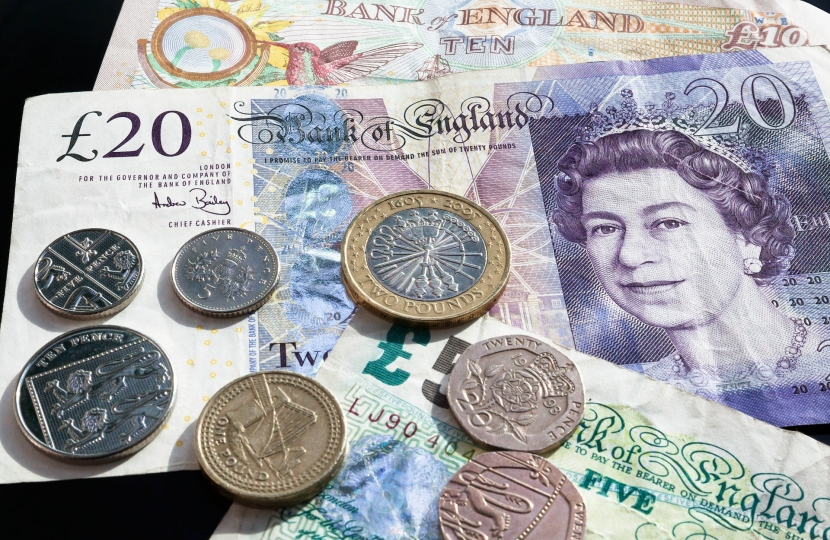 “I’m afraid there is no money” was the note left by Labour’s Chief Secretary to the Treasury, Liam Byrne, when they left office after the 2010 General Election.  That moment of honesty set the challenge for the incoming Conservative and Liberal Democrat coalition.  Labour had sold off the national gold reserves and had spent every penny they could find.

Today, we are almost in the same position.  To deal with the coronavirus and series of lockdowns, the Government has spent about £400,000,000,000.  This economic hit is equivalent to what we would expect to suffer during a major war with a powerful nation.  There is so little money left but the Prime Minister and his Chancellor, Rishi Sunak MP, still have to manage the economy, deliver our recovery and commit to ‘levelling up’.

There has been an almost complete national consensus to support the Government and their scientific and medical advisors on how we manage the pandemic, but we must now be set on emerging from that phase and fully return to normal.

The Government has just committed to giving an extra £1 billion to the Greater Manchester area to upgrade our transport infrastructure.  The local mayor has promised to deliver “a London-style public transport system” but I fear that too much of that money will be spent looking after the interests of the city of Manchester rather than the boroughs on the outskirts such as Wigan and Bolton.

The Westminster Government can work to bridge the gap between the North and the South but, when we see the gleaming spires being erected in Manchester, we have to question whether the local leaders care as much about the towns as they do of their cities.

In anticipating the Budget, has Labour now finally embraced Brexit and the opportunities given by leaving the European Union?  Probably not but the shadow Chancellor, Rachel Reeves MP, is demanding that the Chancellor suspends the tax on domestic energy bills.  EU law prevented us from doing this in the past, but I hope that the Chancellor cuts it permanently rather than giving a short pause like Labour.

What ever the Chancellor wants to do, he is going to be constrained by the reality of the national and international impact of COVID-19 but still has to level up and create an increasingly business friendly environment.

He had already committed vast amounts of additional spending to the NHS and is set to commit even more.  Last year, we spent an extra £63.4 billion on the NHS, already this year it has been £22.5 billion, and the Chancellor has just promised another £6 billion.  Much of this money is to deal with the problems created during the pandemic and the disruption to routine treatment in hospitals and by GPs.

We also need to focus on the training of the next generation of medics, so we need to ensure that we increase the number of medical training colleges and the places within them.  It is not that we do not want to have some foreign recruitment but that we want to give more opportunity for local people to train and work in the health services.

Something that is not always noticed is the amount of time and effort MPs, of all political parties, spend on lobbying and cajoling ministers to invest in their area and it often takes years to be fruitful.

As we move through the autumn and approach winter, the pressure on the NHS is building up.  It is always a difficult time but is going to be more challenging this year.  It is feared that this year’s influenza may be worse than normal, there will be some pressure due to COVID-19, but the greatest challenge may be due to so many people not having had normal treatment over the last nineteen months.

I fear that the greatest problem is going to be in the recruitment of carers who have been on the frontline throughout the pandemic.  There are 100,000 vacancies in the sector and compulsory vaccinations are going to make it worse.

It is bad enough to run out of money, but we must not run out of carers.